I hear you, beets are not your favorite vegetable.  If you had them canned at the cafeteria or dinner table growing up, you might wonder why they grow them at all.  I am with you.  They kind of taste like dirt (or as some say “earthy”) and if you scour the internet for recipes they all seem to lead to a variation on the roasted beet and feta cheese salad.  But, while dining at Babbo during one Christmas season I decided to ask the server which pasta was his favorite.  He told me without hesitation it was a beet ravioli only available on the tasting menu, but he could get me a portion of it as a main course.  Now, at first I wasn’t completely on board with the suggestion.  After all, pasta with a pound of lobster was also on the menu.  But, if the server at Babbo recommends something, don’t be an idiot.  Order it.  Of the many courses we had that night (shared among friends – each of us swearing to order something different from the other), it was the star.  I hadn’t tasted anything like it since, until I saw a Melissa Clark recipe in the New York Times.  Melissa is a funny girl – she will present a recipe with a degree of simplicity and humility that will make you think at first read it is nothing special. Then you will make it and realize she is like an Olympic swimmer – all grace above the surface while working furiously  beneath.

* You can also do this by hand with a box grater, but to avoid a mess of red juice, I prefer the food processor. 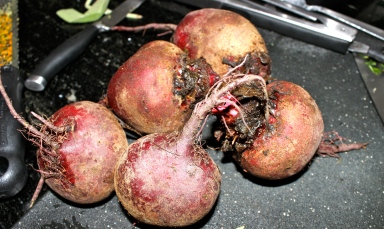 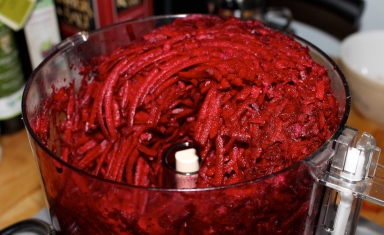 ** What?  Poppy seeds?  Weird.  Should I use it?  Melissa Clark said to use it so, don’t be an idiot, do it.  Or you can use about a quarter cup of chopped pistachios.

1. In a small bowl, combine ricotta, orange zest, and sage.  Season with salt and pepper to taste.  Cover and refrigerate until ready to use.

2. In a large heavy skillet over medium heat, melt 5 Tbs. butter.  Cook until foam subsides and butter is a deep hazelnut color (watch carefully that it doesn’t burn, but make sure it browns – I made an impatient version without letting the butter really brown and the resultant dish was just okay, not spectacular).  Stir in beets and season with 1 1/4 tsp salt and 1/2 tsp. pepper.  Reduce heat to low, cover and cook until beets are very tender, 10-15 minutes.  Stir in vinegar.  Add more salt and pepper if needed.

4. Put pasta in a large warmed serving bowl.  Toss with remaining 1 tablespoon butter, the grated cheese, and most of the reserved liquid.  Toss well; add remaining cooking liquid necessary for a cream consistency.  Stir in beet mixture.  Season with salt and pepper.  Dollop spoonfuls of seasoned ricotta onto pasta; sprinkle with seeds or pistachios and cracked black pepper.

This entry was posted in Cooking and tagged Vegetables. Bookmark the permalink.

1 Response to Pasta with Brown Butter, Beets, and Poppy Seeds